Stillwart sat at the entrance, tapping her foot against the edge of the ticket stand. What a disaster! It was all Appleblossom’s fault. Well, that was par for the course.

Stillwart glanced down at the bandicoot family. For a second she was tempted to sell them the tickets and let them go in. But no, she had to have scruples. Silly things – scruples. She sighed, “You haven’t heard, have you?”

“A tarantula’s loose in the maze. Flesh eater. Dangerous. It would probably eat you.”

Mr Bandicoot adjusted the glasses at the end of his nose. “But it’s plastic,” he whispered. “It’s not real.”

Stillwart leaned forward, and using the same conspiratorial tone, she whispered, “Not this year. Appleblossom Found a real one.”

“What? You’re kidding!” He fairly hurt Stillwart’s ears; all pretense of secrecy was gone.

“No, no, I mean you’re kidding that it was Appleblossom. Appleblossom would never do anything So foolish as to use a real spider.” Mr Bandicoot adjusted the glasses on his nose again. He focused on Stillwart with a serious demeanor, and asked “It was you, wasn’t it, Stillwart?”

What! Stillwart was taken aback, and that was saying something because it took a lot to surprise the much-jaded pixie. Her mouth was agape, and she spluttered when a fruit fly flew in. Spitting it out she said, “Nooo… no, not me, what makes you think that? It was Appleblossom.”

But the bandicoot family had already turned to meet the Koalas, who were coming from the other way. “How was it?” Stilllwart heard Mrs. Koala ask.

“It’s closed,” Mr Bandicoot replied. “Stillwart used a real tarantula. And let it get loose.” The Koalas cringed in fright.

“It wasn’t me!” Stillwart yelled out to them. But it was too late. They were all leaving, shaking their heads, paying no attention to Stillwart’s protests. “That’d be right. The pretty golden-winged fairy wins out again.” Stillwart slammed her elbow onto the ticketing desk and continued with a rapid beat of her foot against the stand. Great. Now the whole forest would believe it was her fault. Stillwart, Releases a Flesh-Eating Giant Spider on the Groves. She could see the headlines of the Gumnut Gazette already.  Yeah, great, her name was mud.

Where was Appleblossom anyway? She was supposed to be recapturing the giant hairy-legged spider… and where was that crow that was supposed to be watching for the spider, making sure it didn’t escape and eat any of the families in the maze? Probably lazed off; crows were unreliable. Mind you, it had been quiet as a mausoleum tonight. This was supposedly a haunted potato field. Using the farmer’s harvested potato patch was meant to make it that much creepier. Humans were always scary. But maybe it was a bit too scary. They had decorated the maze with all sorts of terrifying human images, frightening ghosts, and daunting headless corn stalks. It was supposed to be, well… scary. That’s what Halloween was all about, wasn’t it? It was really a northern hemisphere-based celebration, maybe they were just ahead of their time.

Pity about the shrew family though. That was the only money they’d made all night. Of course they’d never made it out of the patch; no return customers there. Apparently tarantula’s liked small mammals.

“I told Appleblossom we should have stuck to the plastic one, no one gets eaten then,” Stillwart muttered to herself.

Suddenly the pixie hairs on the back of Stillwart’s neck rose up. She noticed that it had gone, very, very quiet. The sounds of night crickets had stopped, and the far off call of an owl had ceased. A chill rose up from the pit of her pixie stomach. The air in the potato patch behind her, had changed. Stillwart froze. She’d usually take flight at the slightest sign of danger, but she couldn’t this time. She was gripped with fear. There was a very small sound, a rustling from behind her. Slowly, with sweat rising from her brow, she turned her head. There it was, legs and fangs raised above her, ready to strike! The giant spider, twice the pixie’s height, lurched back, ready to lunge at its pixie prey.

As the eight-legged monster launched itself, a great swoosh of wings and feathers came from above. The owl that had fallen silent a moment earlier had found its treat for the night. It was Mr. Sooty. In between beakfuls of crunchy spider, it regarded the pixie,

The pixie could only nod her head, her mouth agape for a second time that night. Mr. Sooty winked as he swallowed. “Knew it would mean a meal at some stage.”

“Oh, there you are!” A fluttering of golden wings and glittery, bell-like tones, descended from above. “Oh, I see you’ve found the spider,” Appleblossom said. “You should never have brought it here in the first place,” she accused Stillwart.

Stillwart, just stood there in shock. “Ahh, weren’t you going to capture the spider, Appleblossom? Appleblossom?” 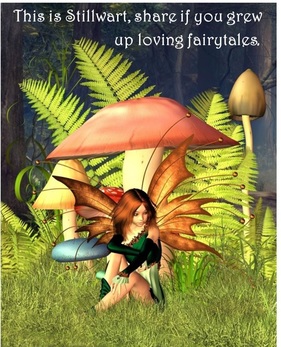